Alzheimer Disease (A,D,) affects 5.3 million Americans; with 5.1 million of those affected being 65 and over. There are 200,000 Americans affected by early onset Alzheimer’s, which means they are under the age of 65 when first diagnosed.

There is no cure for Alzheimer’s and no known way to stop its progression; thus, it is important to understand the facts and support research in hopes of a cure.

Alzheimer’s by the Numbers 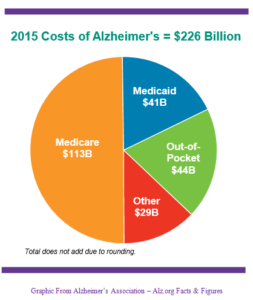 Proactive Steps to Reduce Your Risk of Alzheimer’s

Below are proactive ways to help reduce your risk of Alzheimer’s:

Find out more facts about Alzheimer’s in this free brochure provided by the Alzheimer’s Association.

Live Your Life is very active in the fight against Alzheimer’s disease. We are here to help you Live Your Life WHILE AGING HEALTHY.